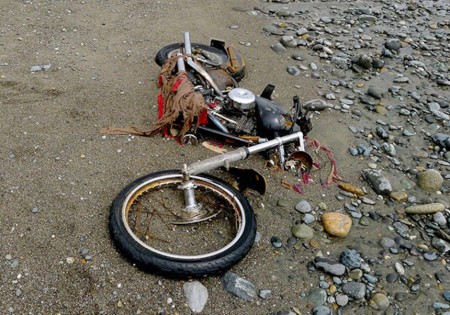 By now you’ve probably heard about the Harley-Davidson® motorcycle that washed up on a beach in Canada, months after the devastating 2011 tsunami that hit Japan. The story has moved countless people – and the bike is now on display at the Harley-Davidson Museum® in Milwaukee. But no one was more affected than the man who found it. The following excerpts are from a blog posted on CBC.ca by Peter Mark, the man who discovered the motorcycle on the shores of British Columbia near the Queen Charlotte Islands.

The container washed up on a remote beach approximately 50 kilometres south of Rose Spit. When I first arrived on the scene I was in shock. I could see the motorcycle from a distance, but it wasn’t until I got closer that I could see the licence plate, a bent, algae-encrusted piece of metal with Japanese characters on it. We knew tsunami debris was coming, but I never expected something this big, this soon, never mind a Harley-Davidson® [motorcycle]!

My first thought was, “What?!?” It dawned on me that this was something that might be in my backyard, something one of my neighbors might own. These were somebody’s belongings, somebody that might have lost everything, possibly even their life.

The unit had thick Styrofoam under the fibreglass exterior, which allowed it to float. How the bike and other items remained in the container all the way across the Pacific is a mystery to me. The bike was not tied down and the door of the container was ripped off. When I returned home from the beach I told several of my fellow beachcombers and friends about the find. Quickly word spread. It wasn’t very long before CBC got in touch with me and I told them that I would supply the VIN number and photos of the licence plate so they could confirm the bike’s origins before posting the story. Right away, they called me back. I was informed the plate was registered in the Miyagi Prefecture, one of the areas hardest hit by the tsunami.

The CBC ran the story on the evening of April 29. I was not prepared for the amount of attention the story would receive. Immediately Ralph Tieleman, from Vancouver Island, contacted me and asked if I would be able to recover the motorcycle. I had not considered it, as the bike was in such bad shape I didn’t think it would be practical to do anything with. I thought it would stay on the beach, a memorial to the Tōhoku tsunami. Ralph offered, with the help of his friends, to restore the motorcycle and return it to its owner if they could be located. We knew this would be an expensive undertaking. The bike was virtually destroyed. They would need to strip the bike to its frame and start from almost scratch. I agreed, and the next day, with the help of my friends, we went and recovered the motorcycle.

In the following days I did interviews with four or five major news agencies in North America and five in Japan! Late in the evening on April 30, a Japanese news correspondent located in California called me with good news, the owner of the bike (Ikuo Yokoyama) was alive!

Ikuo lost three family members, including his father and brother. His house, the container in his backyard he used as a garage for his motorcycle, and everything he owned were swept away by the devastating wave. I was very happy Ikuo was alive, but overwhelmed by the thought that so many others were not. Ikuo, like thousands of others, is currently living in temporary housing. The man from CBC referred me to an online video interview from NHK with Ikuo. He was looking at pictures of the motorcycle that I had taken. He expressed how happy [he was that] it was found and returning to him, “A miracle!” he stated. He also wanted to thank me.

Then Harley-Davidson® [Motor Company] stepped in. They heard what Steve Drane and Ralph Tieleman were planning to do and decided to finance the restoration. They contacted Mr. Yokoyama and told him about the planned restoration. Despite the desire to be reunited with his lost bike, Ikuo declined the offer. He said that he was not financially capable of owning the bike, nor did he have room to store it in his temporary shelter. He thought it wasn’t fair to spend so much on his bike when so many others had nothing. It is very honourable that Ikuo has put the needs of others and the needs of his community above his own hopes and desires. Harley-Davidson has offered to give the money they would have spent on fixing and returning the bike to a tsunami relief fund in Ikuo’s name instead. Hats off to Harley-Davidson, Steve Drane, and Ralph Tieleman for stepping up to the plate and doing a good thing.